Situated in Narragansett Bay, Prudence Island is a village of the nearby town of Portsmouth, Rhode Island. Prudence Island has a year-round population of about 150; the summer population is estimated at 1,500. The island is isolated with access by ferry service from Bristol (3 miles away) or private boat. On average the ferry completes four round trip journeys each day with a one-way travel time of approximately 30 minutes.

The Prudence Island School is the last active one-room schoolhouse in Rhode Island. Until 2009, the town supported a school on Prudence Island in the one-room schoolhouse. At the Prudence Island School, the town provided on-island education for children in the elementary grades, while students in upper grades traveled by ferry to attend middle and high school in Portsmouth. As costs rose and financial support for schools eroded, Island volunteers re-roofed and painted the building, performed custodial duties and donated supplies. In addition, retired island educators taught art, music, and physical education, all in an attempt to make it possible for the school to remain open as a public education facility. In 1995 an informal community fund-raising organization, the Friends of Prudence Island Students, was formed to support extracurricular activities at the school. 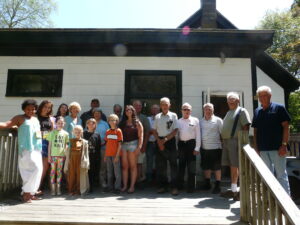 Under the MOU, the Prudence Island School Foundation became responsible for the complete education framework, including developing and implementing educational plans, researching and purchasing curricula, assessing progress and reporting to state and local authorities.

At the time, it was immediately apparent to the Foundation that there was a need to provide services for pre-school and middle and high school students as well. To fill that need, the Foundation secures funding through individual solicitations and fundraising events. The Foundation also runs a Summer Program that provides educational and community-building activities open to all children on the Island, residents and visitors alike.

In 2020, the Town of Portsmouth transferred ownership of the Schoolhouse and surrounding land to the Prudence Island School Foundation. The Town provides financial support for elementary student education. The Foundation continues to secure funding for middle and high school students and maintains the Schoolhouse and grounds, including all upkeep and repairs, as it has always done. Ownership of the building ensures it will retain its function as a school, be available for summer programs, and offer additional programming for the entire Prudence Island Community for years to come.