Halsey Chase built the current Prudence Island Schoolhouse on land donated by the Prudence Land Company and the school opened in the fall of 1896. It replaced the “Old South School” that was located a short distance North of the Baker Farm. Halsey married a young woman named Lizzie K. Studley, who had come to Prudence to teach at the school. Halsey also taught at the school for a period of time as did his daughter Rachel. Halsey Chase, by the way, was the Grandfather of Halsey Herreshoff. Rebecca Chase (twin sister of Rachel) married O. Sidney DeWolf Herreshoff and had two children, Halsey and Nathaniel. 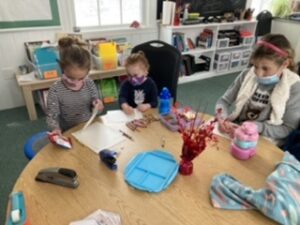 In the 1920s, a young woman named Emily Donovan taught at the Prudence School for several years. One of her students was Evelyn Herlein, who was teacher when I first attended the school in the 1950s. By that time, her name was Evelyn Kaiman. She and her husband Sol, also operated the Friendly Store at Sandy Point. Emily Donovan returned to teach at the school in 1954. She was Emily Brayton by then, having married an Island man many years before, one George Edgar Brayton.

Doris Howard was a teacher at the school in the 1920s. She may have replaced Emily Donovan. Some of her students were Evelyn Herlein, Eleanor Chase, Barbara Chase and Natalie Chase. At one point around 1918 or so, Eleanor Chase was the only school age child on Prudence, and the Town would not keep the PI school open for just one student, but would keep it open if there were two students or more. Eleanor’s father, Eugene, realized there was a child of school age on Patience Island and convinced the parents to enroll their child in the Prudence School. Eugene Chase offered to transport the Patience Island child to the school. This involved having to take a horse and wagon from his farm to the north end, row a small boat over to Patience Island and back to pick up the child, then drive the wagon to the school; only to repeat the process in the afternoon. Talk about being committed to education and keeping the school open!!! Within a couple of years, though, there were as many as ten students at the school again, including the three Chase daughters, plus Alice & Cora Lathrop, and George & Ernest Hull, who lived at the Farnham Farm, and others.

In the 1930s, Margaret Doran from Fall River was the teacher for several years, and at one time there were two students, a brother & sister with the last name of Almy, from Patience Island that attended the school for a period of time with just one Prudence Island student, Gordon Lathrop. The Lathrops lived in the John Albro house on Mt Pleasant Ave, now torn down. 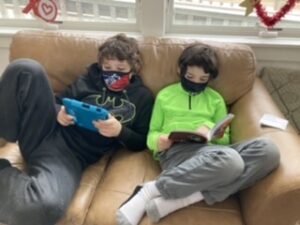 In 1938, a young woman named Florence Kerins came to teach at the Prudence Island School and boarded with Eugene and Louise Chase (Nate Bacon’s Grandparents).  She stayed for that one year, also the year of the 1938 Hurricane. Ms Kerins went on to law school and served as a state legislator for a period of time. Afterwards she was appointed to the Bench as a judge, ultimately retiring as member of the state supreme judicial court. I believe she was the first woman judge appointed to that court.  She never forgot her connection to Prudence Island, returning often to visit with the Chases. Her married name was Murray.  She was a big supporter of the Prudence Island School and attended the 100th birthday party at the school in 1996 along with her husband Paul and their friends, Claibourne & Nuala Pell. Judge Murray also came to Prudence for the celebration of the re-opening of the Prudence Island School around 1989.

Arline Cram attended the PI school and also went on to graduate from RISD and became a well-known artist.

Around 1945, Virginia Martin from Bristol taught at the school for one year, and commuted back and forth on the ferry every day. Several of the Brayton children attended the school that year, and also Danny Barrett.

If you’re looking for distinguished students from the school, you probably don’t have to look very far. Dennis Canario, who attended the school for a number of years, is now a member of the State Legislature, after previous service on the Portsmouth Town Council.

Richard Brooks, Sr. went to the school from 1958 – 1961 and then went on to achieve a PhD degree in Mycology from the University of Rhode Island.

When I attended the school during the 1950s, it was with my two sisters, Donna & Joy, along with Mrs. Kaiman’s daughters, Patsy & Debbie, plus Marcy’s daughter, Kathy. Others that attended during my time there were Rodger, Jim, and Kathy Grant; Jim Bisordi, Lester and Barbara Grant, Rae Ann Favro, Roger, John and Charles Brayton; and also a series of kids from the Navy Base who typically stayed only a year or two.